Unit Ventilators are used to heat, cool and ventilate classrooms, hospital and health care rooms, and Asssited Living suites.. The VEEBoX™ Ventilator Exhaust Economizer improves air circulation in each room so they are  comfortable without hot spots nor cold spots throughout the day.

In a typical classroom, dead zones, particularly in the corners of those rooms, get very little air. Students sitting in those classroom areas don’t get any oxygen either.

The VEEBoX™ eliminates that. The room temperature becomes more even. Hot and cold spots are eliminated during winter and summer. 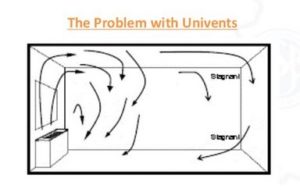 Within an hour of installation of VEEBoX™ a room is significantly different. After the first day of operation,  everything has significantly changed about the room because the mass of the building has been affected. You can feel it right at the doorway. Even the smell is different. There is a very noticeable difference between the room with VEEBoX™ and a room without the VEEBoX™.

From an engineering perspective most school rooms are constructed with cinder blocks. Because cinder blocks have so much mass they retain heat and help establish a normalized temperature.

Without the VEEBoX™ to circulate the air, the walls are either sucking in the energy or giving off the energy. A ventilator unit never establishes a norm because of the temperature swings caused simply by students coming into or leaving the room hourly.

Imagine having a party at home. As more and more people come into a room the room gets really hot. You open up windows to cool the room off. Or people move to another room. As they do, their body heat starts to heat that room up as well. They may shuffle back and forth trying to establish a norm. A thermostat in one of the rooms reads crazy temperature swings with people coming in and out and tries to constantly adjust instead of holding a set point.

Better air distribution with VEEBoX™ sends the air across the room over to the thermostat to better regulate the temperature output from the unit ventilator. By holding that temperature at a fixed point there is a tremendous energy savings. The average number is a 15% reduction in utility costs by simply improving the air distribution.

This is like putting your car on speed control which saves about 10% in fuel costs. The gas consumption is regulated and steadier. There is a huge savings without the bursts of acceleration.

The graph below was developed by the Illinois Dept of Commerce and Ecomonic Opportunity.  Shown are the three years (2011-13) before a VEEBoX™ units were installed and the two years (2014-15) following. You can see how much lower the utility consumption after installation. A utility bill shows how many therms were used in any month which you can compare to any other month.

Note: These numbers have been 'normalized' based on what is referred to as degree days. We are thus able to compare any one period with any other period.

For example, how many degrees did you run on a per hour basis for a 24 hour period? Let’s say it is for 1,000 degree days, but you really only have data on 750 degree days for one period while the other period is 286 degree days. You project each of the numbers up to a thousand degrees. Then you can compare the efficiency between any two sets to see which one is more efficient.

With better circulation throughout, mold growth and odors decrease. Body odors are also reduced. The overall health and well being of occupants is enhanced. Stabilizing the temperature makes you more comfortable.

Surfaces will be kept drier by improving the air circulation. Damp carpets and walls will dry quicker. Mold related problems are minimized.

For example let's say you have a spill, or the snow melts on the floor in the winter. You suck up the liquid with a vacuum, sponge or towels and then put a fan to circulate the air. Soon the fan dries all the liquid out of the carpet.

The Ultimate Solution – Comfort, Efficiency and Healthier Air
Hospital quality “fresh clean” air is produced in classrooms and patient suites by adding the FC-400 ionization device into the VEEBoX™. By dispersing ionized air evenly throughout the room, harmful mold, bacteria, allergens and viruses are destroyed. This assembly is referred to as the VEEBoX Ion™.

The toxins that can cause disease and illness are reduced or eliminated completely. Airborne molds, pet danger, cleaning compound chemicals, dust, pollutants, contaminants, odors, bacteria, viruses and allergens are captured.

Read more about Bipolar Ionization Technology.
Call 630.231.3986 to Learn More or Click To Link to Our Contact Page

* When you put all those things together you create an environment more conducive to education. Students can focus better and learn better and that is the primary objective of education.

A study by Dr. Richard Shaughnessey in the “Journal of Indoor Air” showed a 14.7% increase in math scores and a 13.7% increase in reading scores in classrooms by improving ventilation quality as it relates to health and comfort.